Recipe : Turkey, Leek and Pea Pie (and how to make it dairy-free!)

This recipe makes a tasty, filling meal for four or more and can be prepared completely dairy free! Our youngest, Terror 2, is dairy intolerant, something we discovered almost a year ago after eliminating certain food groups from his diet and finding no difference to his poorly tummy until we removed all forms of dairy. He changed, almost overnight, into a much happier little boy and his poorly stomach disappeared just as quickly.

If you've ever encountered an intolerance, be it dairy, egg, soya, wheat, gluten etc, you'll probably know just how many random things these ingredients turn up in..I often find dairy in things it has no need to be in! Needless to say it causes quite a few issues on the food front and I've spent hours reading through ingredient lists on the back of food packets but, by preparing the majority of the food we eat myself, and using substitutes such as oat milk (oatly is my saviour!), vitalite in place of butter, alpro soya in place of yoghurt etc, he can eat almost everything we can! Except cheese..I haven't been able to find a replacement for that yet.

Note: I've used oat milk as a substitute for milk in this recipe because we found that soya, rice and almond milk became too sweet when they were cooked. 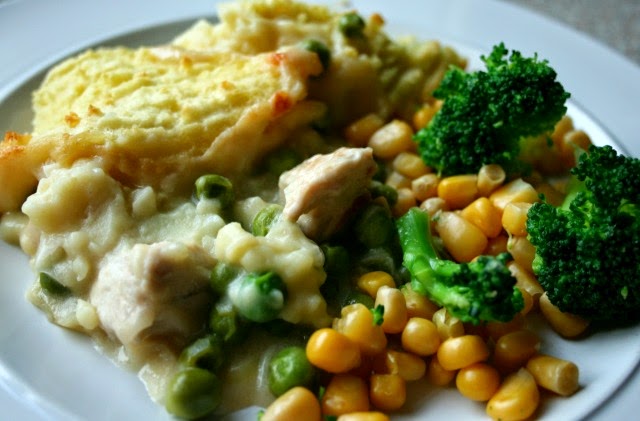 Preheat your oven to 200°c (fan 180°c, gas 6) and boil the potatoes on the hob. When they are tender, drain and leave to steam dry for a couple of minutes then mash them with milk and a knob of butter.

Create the white (cheese) sauce by melting the butter in a saucepan. Stir in the flour (I've found sifting it in makes a smoother sauce) and cook for 1-2 minutes. Take the pan off the heat and gradually stir/whisk in the milk until it makes a smooth sauce. Return the pan to the heat and bring the sauce to the boil, stirring constantly. Allow the sauce to simmer gently for 8-10 minutes, seasoning with a pinch of salt. Add the cheese, if you're using it, stir it in until melted.

Heat 1tbsp of oil in a pan and fry the diced turkey and sliced leeks for around 6 minutes, or until the turkey is cooked through. Transfer the turkey and leeks into a large ovenproof dish, adding the frozen peas and white (cheese) sauce. Stir well then spoon the mash potato on top, spreading evenly and marking with a fork.

Bake for around 30 minutes until it's golden and bubbling. Serve with fresh vegetables and tuck in.